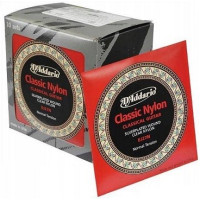 In the past, guitar strings were made from prepared animal intestines, today nylon and steel strings are used most often.

Nylon strings are used as standard in classical guitars. Steel strings are used in other types of guitars. Occasionally, strings made of other materials or their joints, e.g. steel-silk strings, are also used.

There are twelve-string guitars in which each string is doubled. The two highest strings are tuned unisono, and the remaining in the octave interval.

Russian and Mexican folk music also features seven-string guitars. They are also used by some modern metal bands to achieve "heavy" sounds through the use of lower registers.

Ten-string guitars are also constructed. The difference between such a guitar and a traditional 6-string guitar is the addition of 4 bass strings. The introduction of additional strings m.in. aimed at more faithful performance of Renaissance and Baroque music on the guitar. Many lute tracks from that time require a larger scale than a regular guitar allows. Such songs can only be played on a 6-string guitar through transcription. The promoter of such an instrument was the Spanish classical guitarist Narciso Yepes. Wikipedia